The plinky prompt today was describe your most embarrassing moment.

This one is the stuff legends are made of. 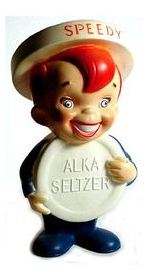 Think back a long, long time. Are you back in the early days of television, when there were a whole series of Alka-Seltzer ads. They were one liners, followed by the picture of two Alka-Seltzer tablets being dropped in a glass. There were things like

“Are you SURE you paid the mortgage?” Plop, Plop, Fizz, Fizz

“Why is the dog digging in the neighbor’s flower beds?” Plop, Plop, Fizz, Fizz.

Well, my darling husband and I were newly married, and were visiting his parents. We were watching TV after dinner and one of those ads came on. I thought it was pretty funny, and repeated the words…

…and his mother walked in the door from the kitchen.

I weighed in this morning and had lost another 2 pounds – that’s 8 pounds overall.  It’s getting to be a little easier, although I still look up just about everything I eat to make sure it fits in my daily allotment of points.  I also made a real effort to walk a little farther and a little more often this week.  I found while I was at the Casino that I could walk all the way from the casino floor, up the ramp, and through the lobby to the elevators without having to stop and breathe.  That’s an improvement from before Christmas when we were down there.

On the strength of two pounds, we went to Tokyo One – the sushi buffet – for lunch. 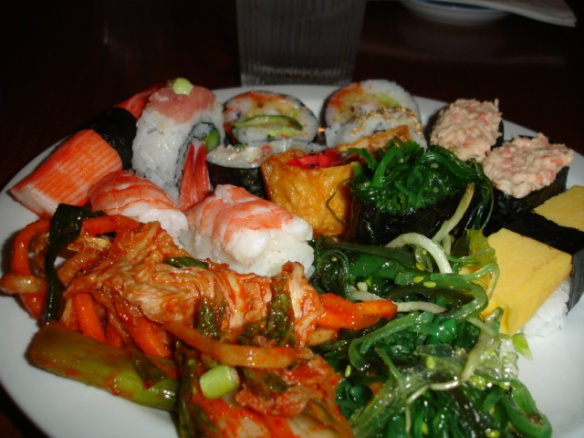 You might think that sushi is not very diet friendly, but seaweed salad is 1 point for a whole cup, kimchee is virtually point free, cucumber salad is very light on points, and each piece of sushi roll is only 1 point.  I had 20 pieces of various flavors and fillings for 19 Weight Watcher points.  And as a proof that I’m serious about my diet, I passed up ice cream – my favorite thing in all the world.  I also gave the Shrimp Tempura and Creme Brule a pass.

Looking at my calendar for next week, I see I will go to my bookkeeping job tomorrow morning, so I will have a venti, non-fat, no-whip mocha

and a granola bar instead of my regular venti mocha and blueberry scone.

On Wednesday, I’ll be careful with my sandwich at bridge – maybe I’ll take a Subway

cold cut combo – and I will say “Thanks, but no thanks” to the chocolate candy that always gets offered.

I’d better skip breakfast at Toastmasters on Friday, and have a banana

I’m going to keep on keeping on with this diet, come hell or high water…

Right after I posted my blog yesterday we left for an overnight run to Bossier City to the Horseshoe Casino and Hotel overnight, and then a trip to the commissary this morning.  We got home about 4 p.m. and by the time we got the car unloaded, the meat repackaged for the freezer, and all the bags of groceries unpacked it was after 5:30.  I’ve been reading e-mail since then, and it’s now 7 p.m.

I’m going to put my feet up this evening, and then tomorrow I have to go to Officer’s Training/Retreat at the church.  We’re having Len Sweet, author of Nudge

Then Sunday we have a guest preacher, and I think we’re supposed to have another speaker in the afternoon and a concert in the evening.  I will probably skip the afternoon and evening stuff, and come home for a much-needed nap.  (I don’t ever sleep well the first night in a hotel, and when we’re only there one night, I don’t sleep well.  Duh!)

Monday I go to my 2-day-a-month bookkeeping job, and Tuesday I’ll have to take my car to the windshield repair place because we got a rock kicked up into it and it made a little crack.  Then Wednesday I have bridge again, and I’m going to try to make it to the Taise prayer service at the church at 6:15, since it will be the first day of Lent.

I don’t know how long it’s been since I’ve been busy for seven or eight days straight.  I’ve gotten completely out of the habit of having to be somewhere every day!  I like being retired…

I used to love to drive, just about anywhere, and I still love to “take a ride.” When I was growing up, we would escape the heat and stillness of a Sunday afternoon, by piling in the car and taking a ride down shady country roads. At least the motion of the car stirred up a breeze with all the windows down (I was 10 years old before air conditioning became ubiquitous in houses, and even older before it was standard in cars). 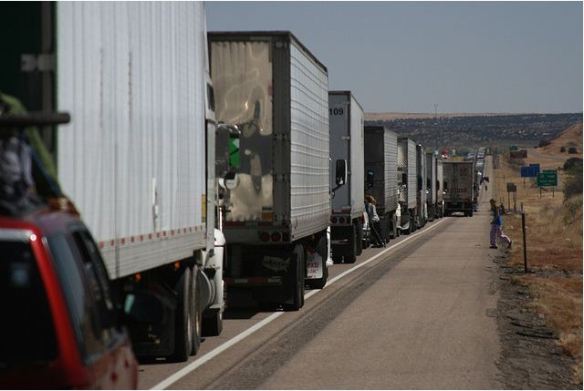 semi’s on the interstate scare the p-wadden out of me. Because lots of other people also seemingly like to drive, I have transferred my love of touring to riding in a train. If there is a train going there, I will opt for that mode of transportation every time. 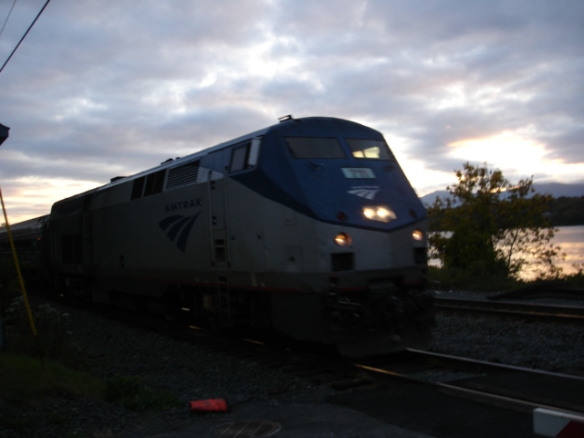 Riding in a train, you can look out of the windows and watch the countryside roll by. 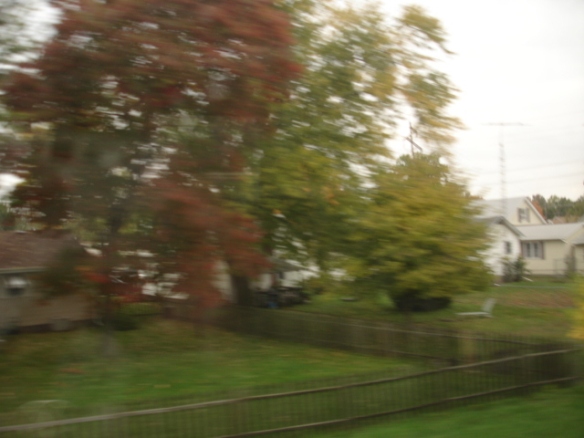 You can get up and walk around. 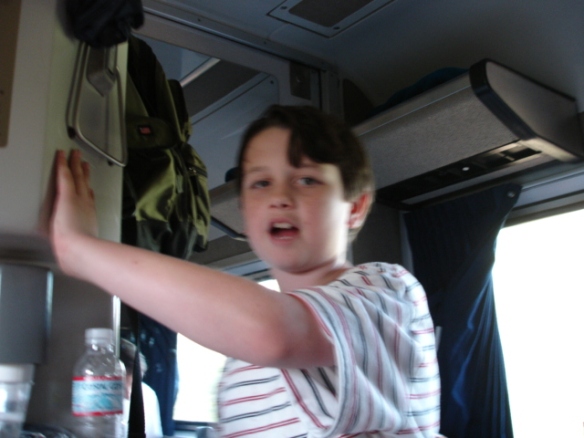 You don’t have to stop for a potty-break or to get something to eat. “Dinner in the diner, nothing could be finer than to have your ham and eggs in Carolina.” 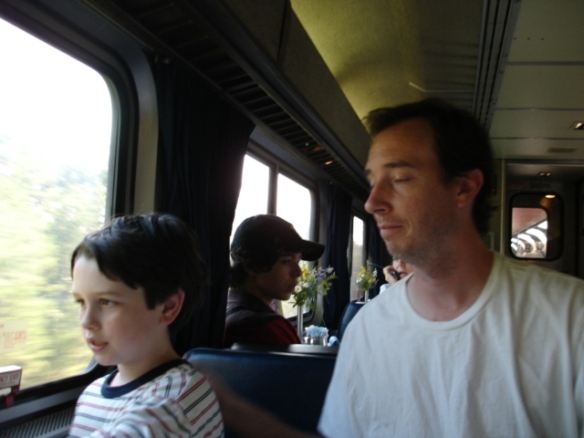 You can read a book, 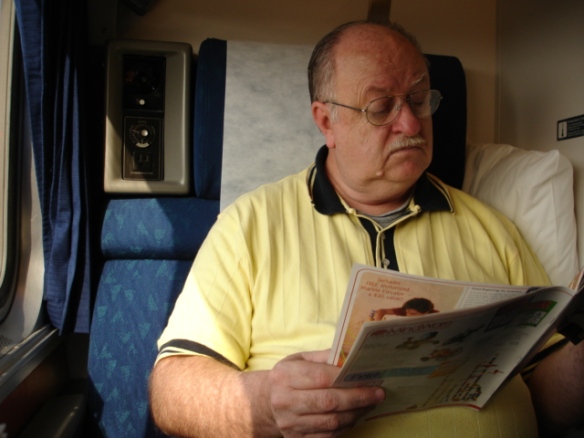 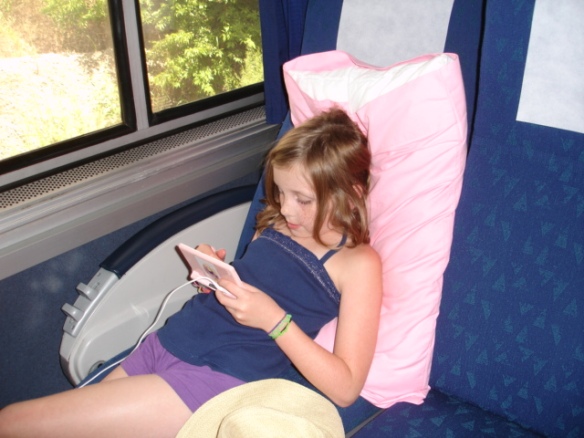 sleep “comfortably” and still be on your way.

We travelled all over Europe by train in 1982. Since we’ve been in Dallas, we’ve taken Amtrak to Chicago 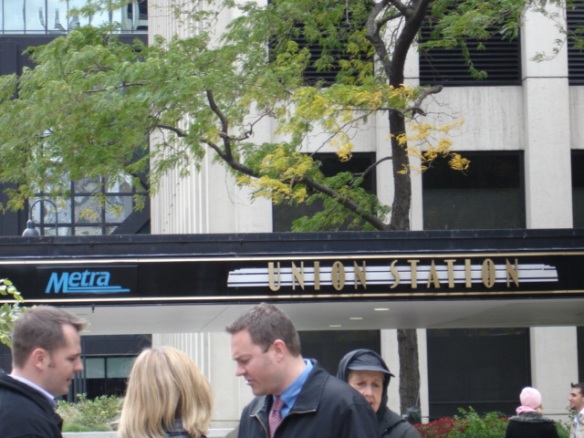 and San Antonio several times, to the West Coast (Seattle via Los Angeles), 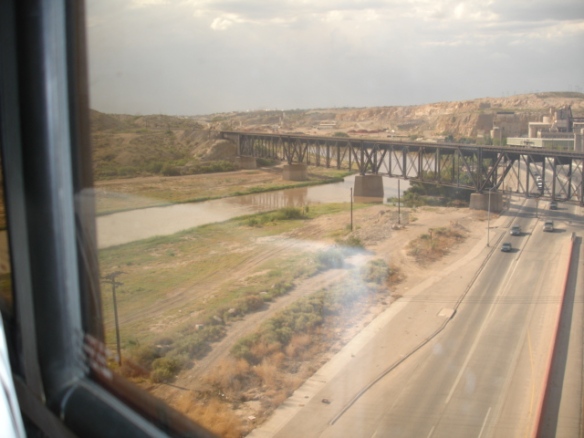 across the Empire Builder route from Portland to Chicago, 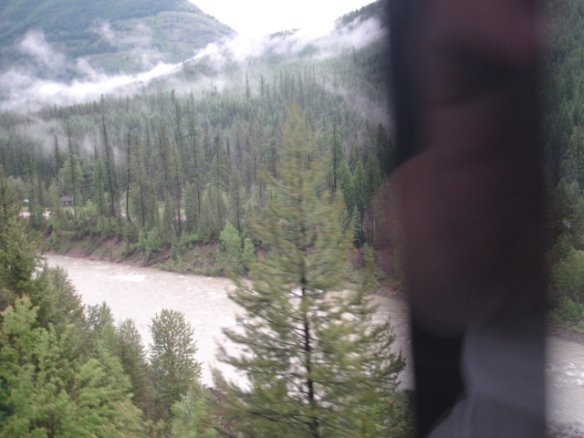 to the East Coast (New York via Philadelphia) 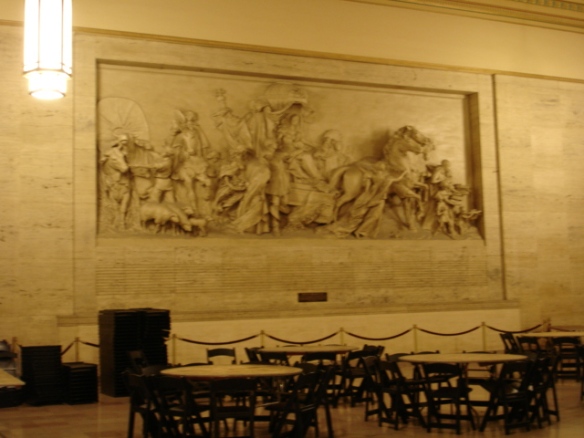 and from New York back to Chicago via the Lakeside Limited. 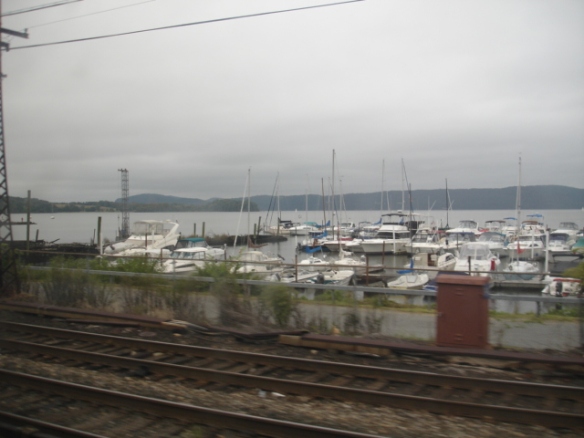 So when it comes to “going” I will opt for a train anytime. Sometimes we just ride the Dallas Area Rapid Transit to the end of the line and back. We will ride the train from Dallas to Ft Worth for an outing. I can’t wait until we get to Tacoma and can take a train more often and to more places, with decent schedules. 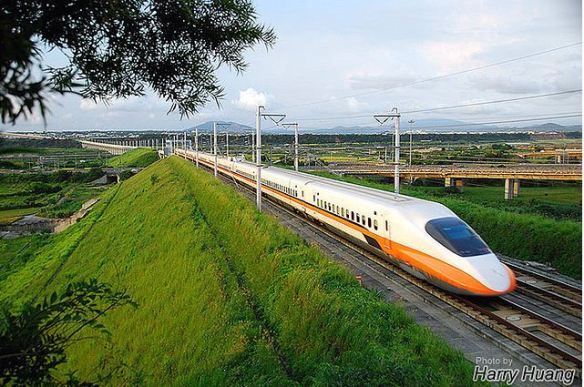 One of these days, the United States is going to catch up with the rest of the world and have high-speed rail going everywhere we want to go! If only I live that long.

The Plinky.com prompt today was “Post a photo of a fashion statement you regret making.” 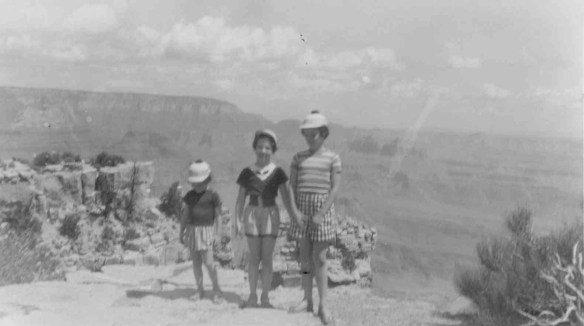 That’s me in the striped shirt and checked shorts (what was my mother thinking?) 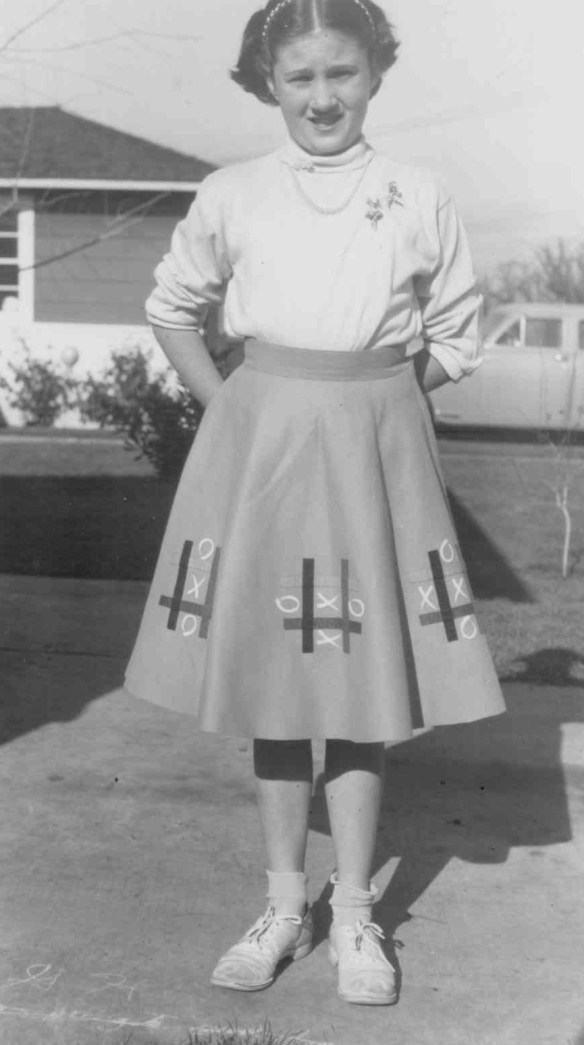 The skirt was pea green and the turtleneck was pink – but it’s the shoes and socks that “make” the outfit! 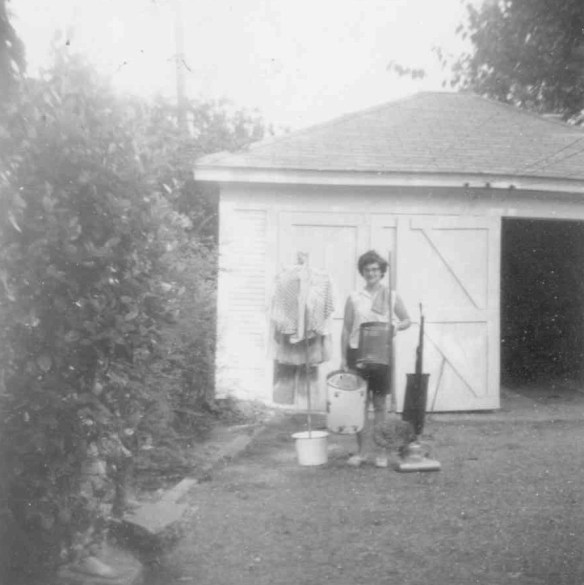 In my defense, I was being the upstairs maid for my grandmother during the summer to earn money for a trip to Europe. 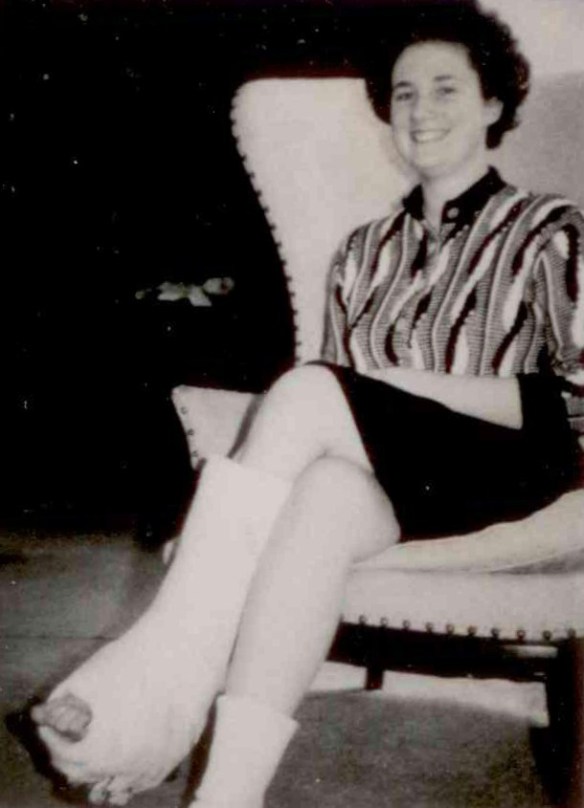 I “LOVED” that sweater, although it makes my eyes hurt to look at it now.  It was black & white, so you’re not missing anything here with the photo not being in color.

My recent fashion “faux pas”s seem to consist mostly of stuffing my fat butt into too small pants, and I’m NOT going to show those!

I thought I’d go back and repost this…

I’ve lost another pound this week.  That’s a total of 6 pounds over all.  It was harder this week since I ate lunch out on Wednesday, and, then Friday, Saturday, and Sunday were all dinner (at lunch time) out.

I don’t foresee any major hurdles this week except on Thursday when we are going to Bossier City for our bi-monthly shopping trip.  We’ll go down Thursday afternoon, and stay at the Horseshoe Casino and Hotel overnight.

The problem is they have a wonderful buffet, and I just have no will power at buffets.  I seem to think that because I’ve paid whatever the price is, I ought to eat, at least a taste, of everything in sight.  That would be all right if I just had a taste, but I never seem to know when to stop.  Maybe we’ll eat at a restaurant instead of at the hotel.  I should be able to handle that better.

Friday I’ll walk a lot of what I eat that day off in the commissary, I hope.  It takes upwards of an hour to shop, and, although it’s stop and go, I’m on my feet the whole time.  Big Al used to do the shopping while I stayed at the casino and tried my luck on the slot machines,

but the last time we went he asked me to go with him.  His back really bothers him when he is on his feet for that long.  We’re just getting too old for this!

I’ve been getting a little bit of exercise every day, but I need to get more regular about it.  That’s my goal for the next couple of weeks – to actually walk more than just what I HAVE to for shopping and housework.  (Groan…)