Last Saturday, a group of us from Franke Tobey Jones joined folks from the Ruston Senior Center to have a wonderful day on the Mt Rainier Scenic Railroad. Our bus driver took us to Elbe, WA, the terminus for the tour.

We got there in time for breakfast at the local diner which is made from old railroad cars. There’s also a motel behind the restaurant made out of old cabooses.

The interior is has some wonderful old artifacts including this etched window (I hope you can see where it says “Silver Palace Car” and “Southern Pacific 1865”). 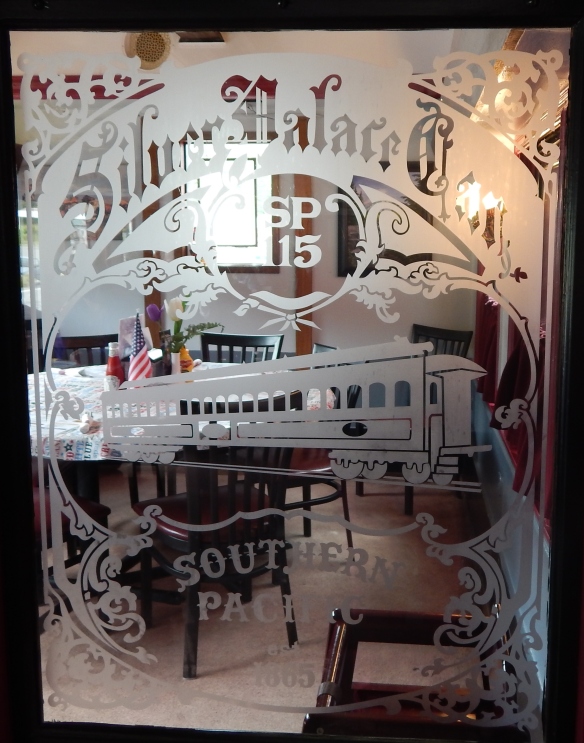 They also have a large emblem from Union Pacific Railroad. 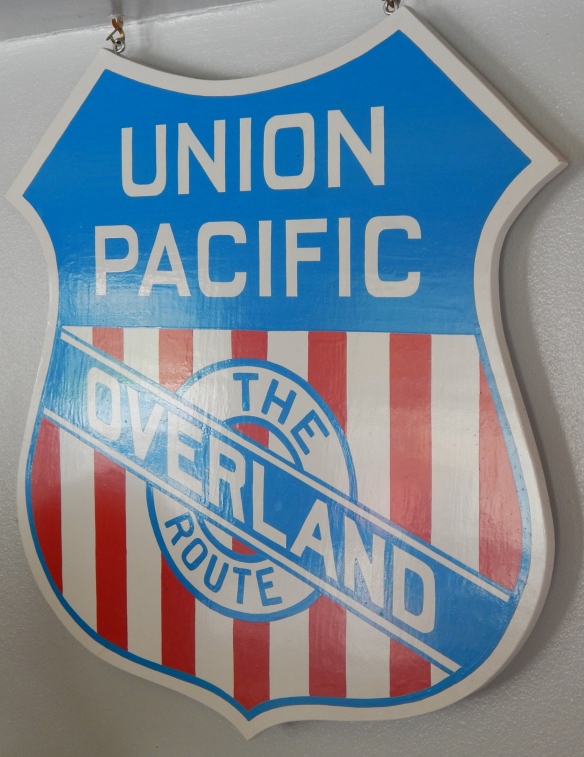 The best part, though, are all the model trains – engines and cars – they have on display on a ledge around the top of the walls. 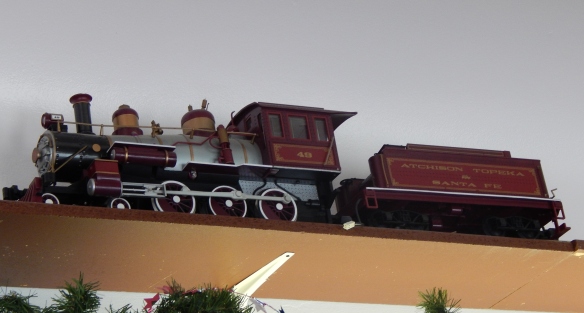 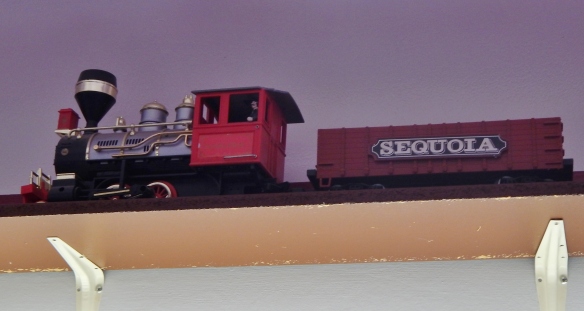 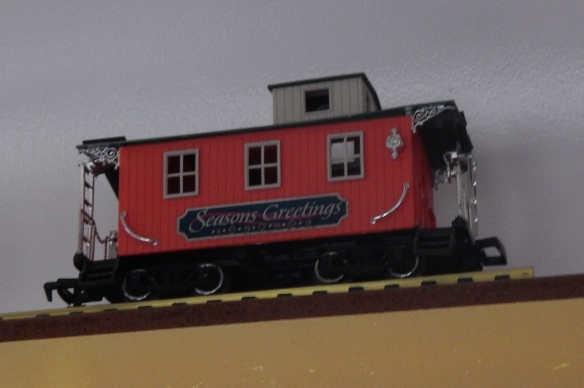 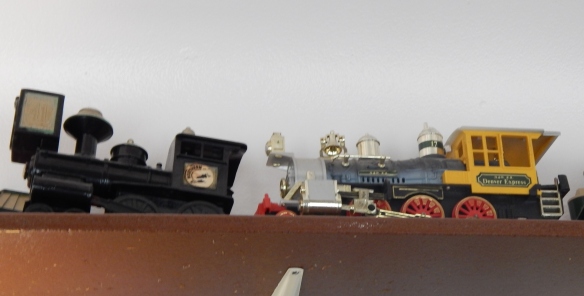 Elbe is an historic little town with an interesting old church and some old buildings that were there around the turn of the twentieth century. It was a jumping off point for the logging industry who spread out from there to logging camps all over Mt Rainier. 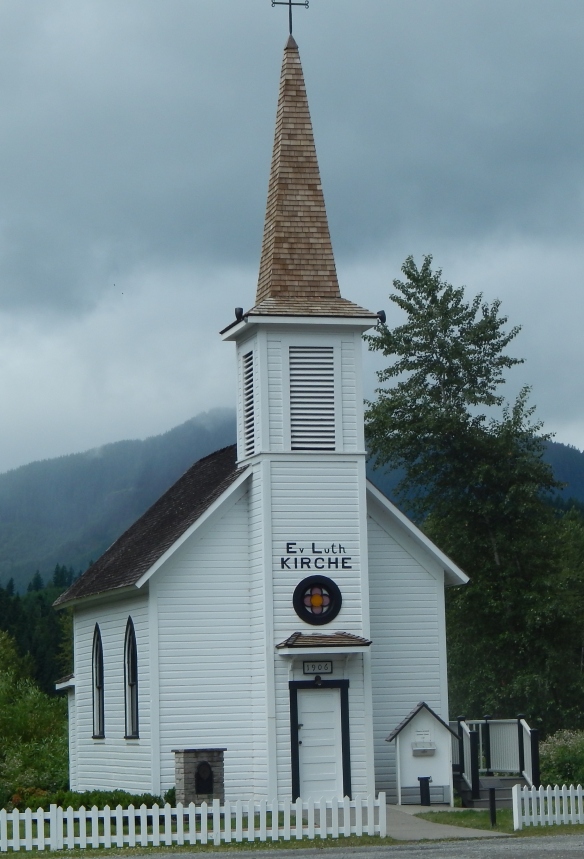 They have one of the old logging engines and coal cars on static display by the depot. 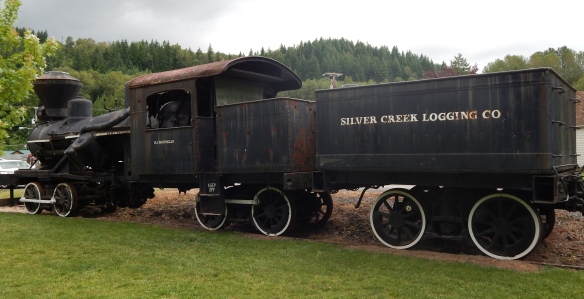 We looked around their gift shop, and about that time here came the train.

We climbed on board, and settled ourselves for a 45 minute ride to the old logging camp and museum they have set up near Mineral, a little town on the shores of Mineral Lake.

Along the way we passed wild flowers in the fields, and beautiful old trees and second growth forest.

We crossed a bridge over the Nisqually River which flows out of the glacier on Mt Rainier. Unfortunately the clouds were thick and we couldn’t see the mountain.

After we crossed the river we followed the winding track which ran alongside Mineral Creek. 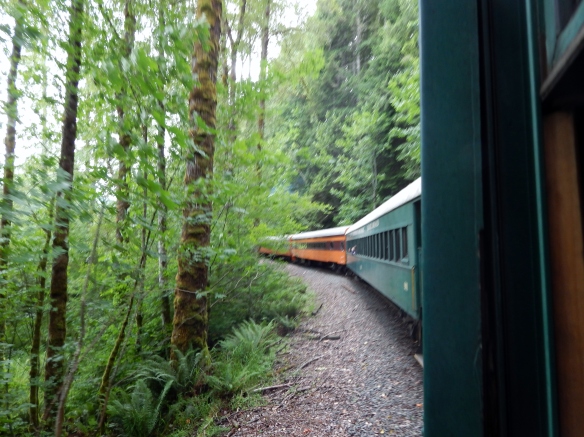 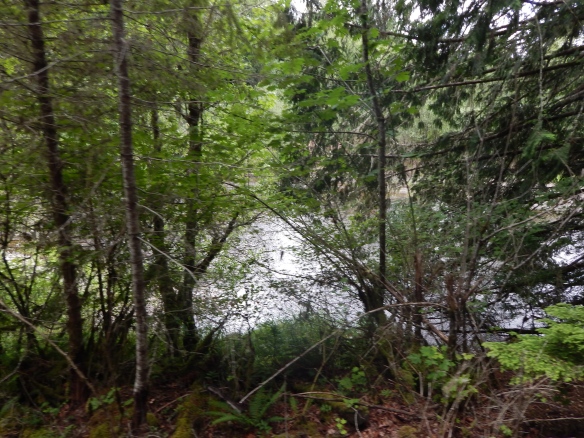 We finally arrived at the Railroad Camp.

The Railroad Camp is where they have a museum, many old steam engines, and a whole logging camp set up. The buildings were built on skids and moved from camp to camp by flatcar when the trees in one area had all been logged. 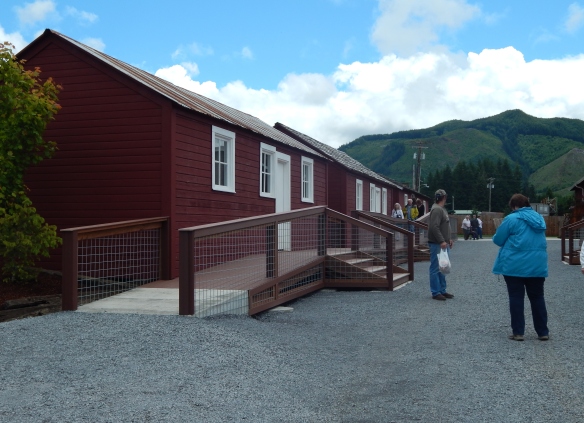 They have one of the “dormitories” set up with furnishings for the women who cooked and cleaned for the lumberjacks. The others will be furnished as bunkhouses as funds become available. 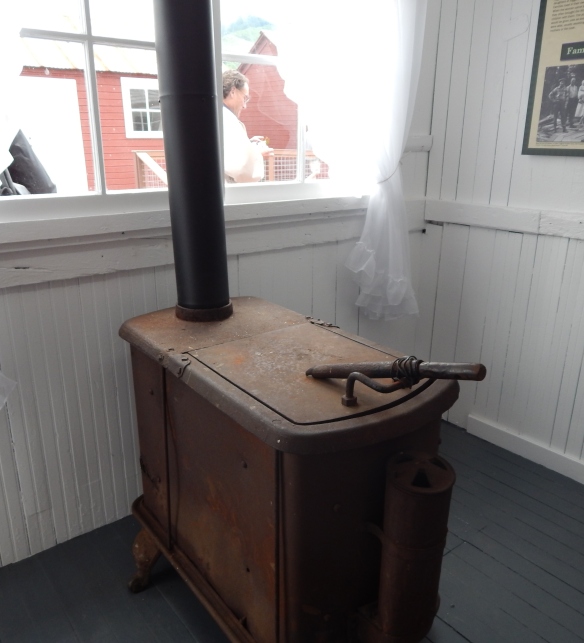 There were all sorts of equipment from logging donkeys to large steam engines to things I had no idea what they were. I know Ray would love to poke around there. (The one thing I noticed was that none of the engines had cowcatchers. I guess they didn’t need such a thing in the forest.) 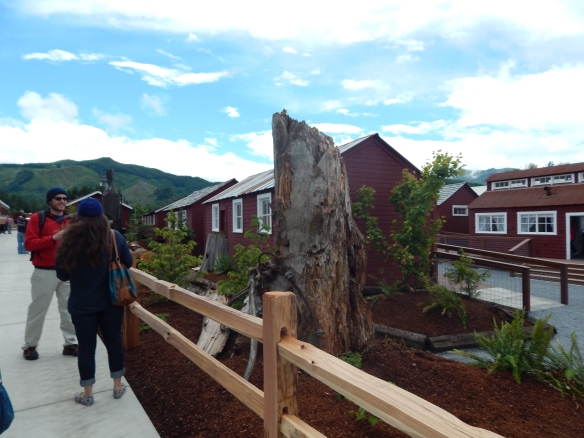 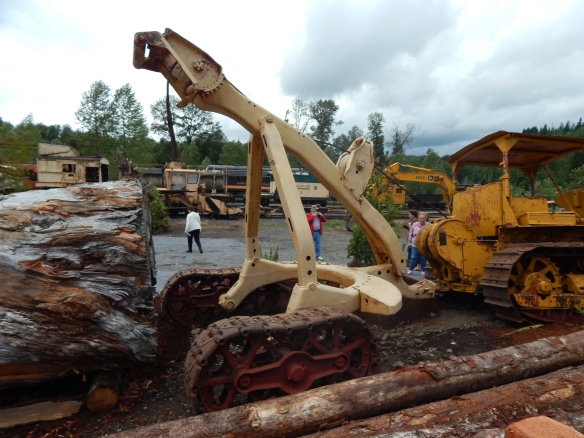 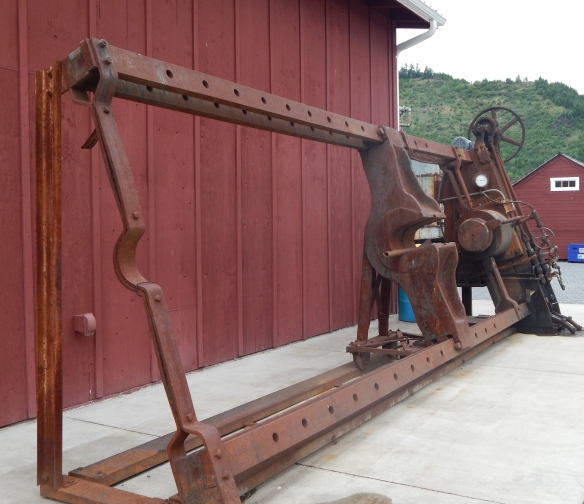 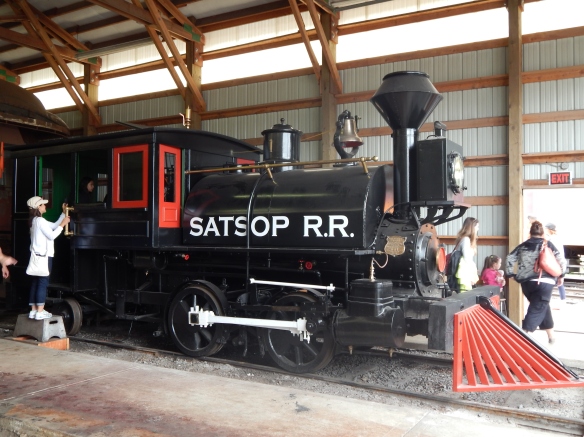 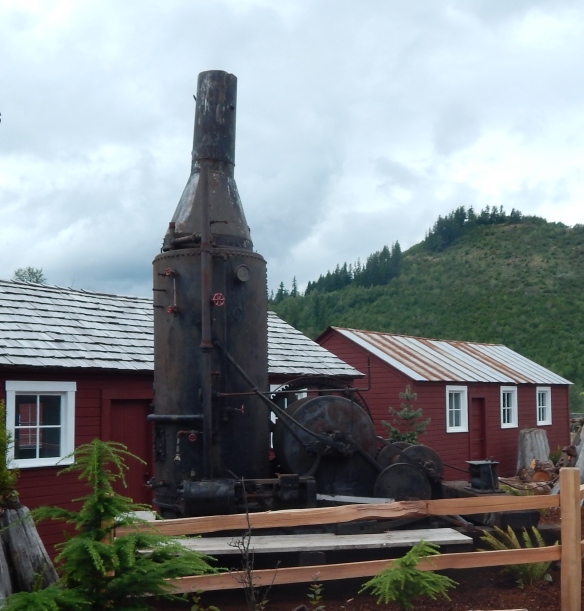 As we rode back to Elbe, we were reminded that Mt Rainier is so big, it creates its own weather. As we crossed the Nisqually, the rains came and we were glad to be snug in the railcar, and close to our bus for the ride back to Tacoma.

Residents and friends at Franke Tobey Jones boarded the bus a couple of days ago for a trip to Northwest Trek Wildlife Park. When we reached the park we walked down a little hill, and boarded a tram for a trip around the area to see the free-range animals who live there.

The ride begins by a lake filled with Canada Geese at this time of year.

Throughout the park we saw beautiful foxgloves, in all shades of pink. 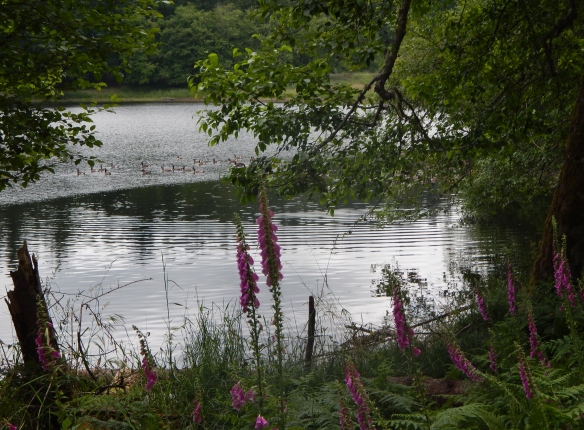 Apparently the deer have sense enough not to eat them. (Maybe I should put them in MY yard since the deer leave them alone.) 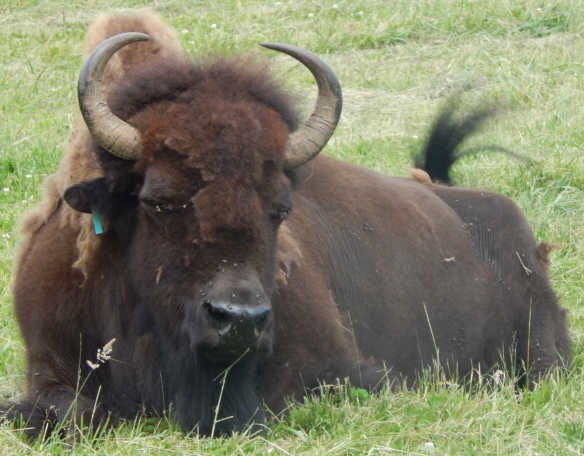 There are also beautiful views across the hills to the Cascades, 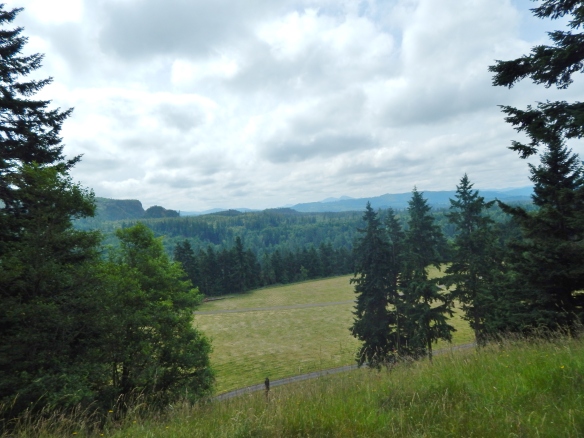 After a fine lunch at the Rainforest Café, several of us took one of the many walking trails to see some of the caged animals.

Most of them were sleeping in the brush, but we were able to spot a cougar, a lynx, a coyote, and a couple of grizzly bears.

By that time we were all tired, so we loaded back on the bus to return to Franke Tobey Jones, after a wonderful outing and early summer’s day at the park.

This is a re-post from last year’s Father’s Day post. I’ve posted this several times, but I can’t do any better on Father’s Day.

For those of you who are touchy-feely personalities, you probably thought it was terribly dry, and you don’t really have a feeling for the man whose life I honor today.

But correct and factual actually embodies him better than many of the other things I can say about him.  That’s not to say he was uncaring, or cold – unless you think the rock your life is built on is uncaring or cold.

To me, he was strong, solid, dependable, deep, supporting, and faithful – qualities I’d opt for any time over sweet, sentimental, emotional, sensitive and demonstrative.

I remember in the movie “Love Story”, the main character was estranged from his father, and said “My father never wrote letters to me, he sent Memos”.  When we heard that my sisters and I looked at each other and said, “So???”  Papa used to always send us memos in school.

Do you need any?  How are your grades?

When Ray was just 2 months old, I became gravely ill.  Al and I were still in college – Al was about to graduate – we had NO money – we didn’t know what to do.  So Al put Ray and me on an airplane and shipped us back home.  I ended up in the hospital for three weeks, Mama was working at a new job, so during that time, Papa took vacation from work and stayed home to take care of the new baby.

I don’t know many grandfathers who thought their “baby days” were over, who would have done the same, but there was never any question about it with Papa.  He just did what needed to be done.

Papa loved to fish and, although he was a loyal churchman, we occasionally could convince him to take us fishing on Sunday mornings – particularly if he had caught a line full on Saturday.  In Arkansas during the summer the only time the fish will bite is early in the morning – right during church.

I remember my sister and I convinced him to take us on a float on Little River one Sunday morning from Cerra Gordo, Oklahoma to Little River Country Club.  Someone would drive us up-river where we would put in about dawn, and then we would float back down to the club.  As I said, this was a Sunday morning, and Papa’s conscience must have gotten the better of him, because we did the middle three miles singing “Love Lifted Me”, “Shall We Gather at the River” and all the other good old revival songs at the top of our lungs.  We sang the verses and Papa provided the oompa-pas.

As an engineer, he always loved to stick his head under the hood of any car around.

That’s Papa with two son-in-laws, two grandsons, and his only son.

Mama was diagnosed with Alzheimer’s in 1993.  Papa took over running the house as Mama became less and less able to keep up with things.  But he didn’t do it like a woman would, he did it like an Engineer with schedules, and flow charts, and checklists.  And he never complained.  He didn’t take up cooking, he took up shopping for microwavable dinners.

He let Mama keep doing the wash – because it was one of the things she could still manage, until the day she emptied the trash into the clothes washer and started it running.  Papa was taking a nap in his recliner in front of a baseball game when he heard a terrible rattling and clanging coming from the laundry room.  Empty bottles and cans were agitating in the washer!  But he didn’t fuss.  He just cleaned out the machine, and put a lock on the sliding door.  He continued to care for her at home until the sibs and I finally convinced him that it wasn’t doing either one of them any good.

He was a great tease and kidder.  It is one of the things that never left him, even at the end of his life.  Clara, one of nurses in the health care unit, said a few days before he died, he was semi-conscious, and she had just finished taking his blood pressure.  She leaned over him to straighten the linens on the other side of the bed and suddenly he popped his eyes open and said “Boo!”  Then he just grinned.

While we lived in New Jersey, Mama and Papa became friends with one of the preachers at the church and his wife.  Orville and Margaret Austin remained friends for 30 years, even though they moved away in 1963.  They really enjoyed playing bridge – men against the women – because the women claimed the men didn’t really know what they were doing.

I think about 7 o’clock last Monday evening, Orville and Margaret and Mama were gathered in heaven to meet him with the cards already dealt.  “Sit down.  What took you so long?  We’ve been waiting for you for 10 years.”

He was my foundation, my rock, my underpinning, my support!  He was my father, and, although we had him many years longer than the biblical three-score years and ten, it was still too short a time.  Someone once said, “You are old when there’s nobody left to whom you are a little girl.”  I miss him. 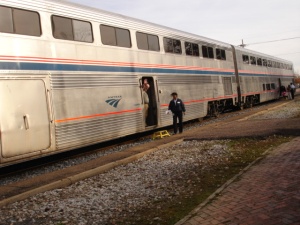 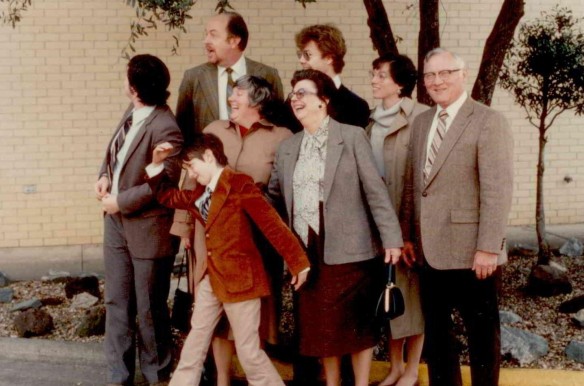 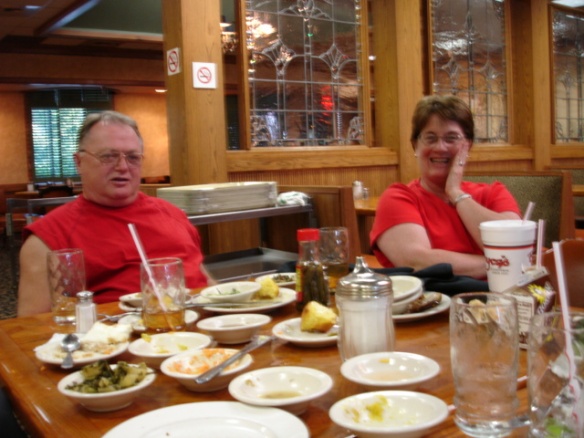 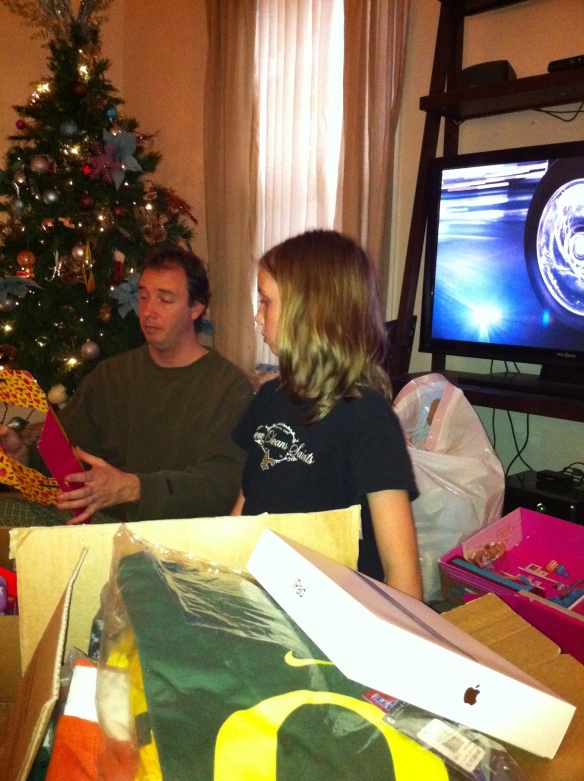 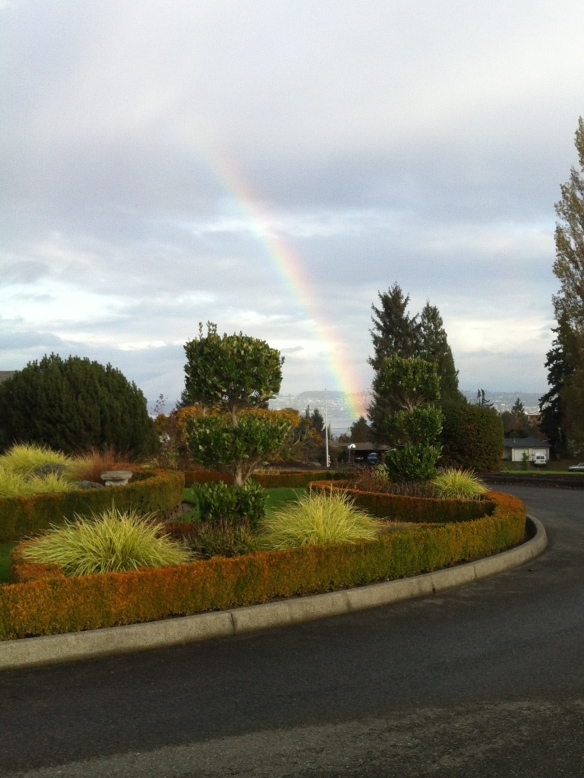 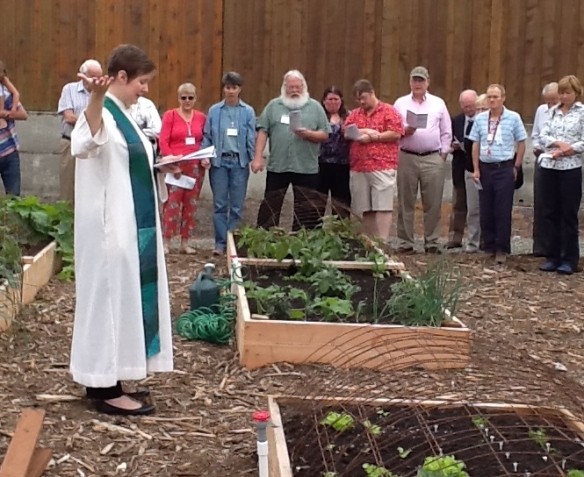