(Many thanks to MaryAnn McKibben Dana for her great workbook that gave me an opportunity to review 2016 and to begin to set intentions for 2017. You can get yours here.)

This life-long Presbyterian got to attend General Assembly for the first time. I didn’t go as a commissioner, but I did go as a volunteer and got to meet many of my on-line friends in person for the first time. I also got to renew friendships with folks I met years ago. The open atmosphere, and loving acceptance of racial, sexual, and gender differences was healing to my jaundiced heart. 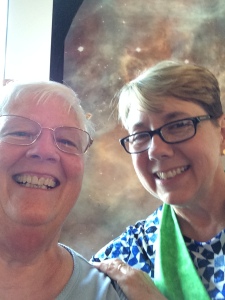 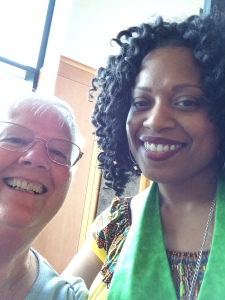 Co-Moderators of the General Assembly Jan Edmiston and Denise Anderson 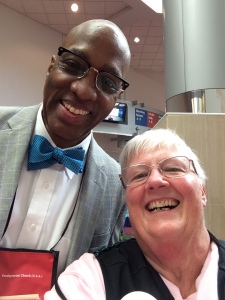 Also, this fall I was elected Vice-Moderator of Olympia Presbytery and installed in the November meeting to take office January 1, 2017 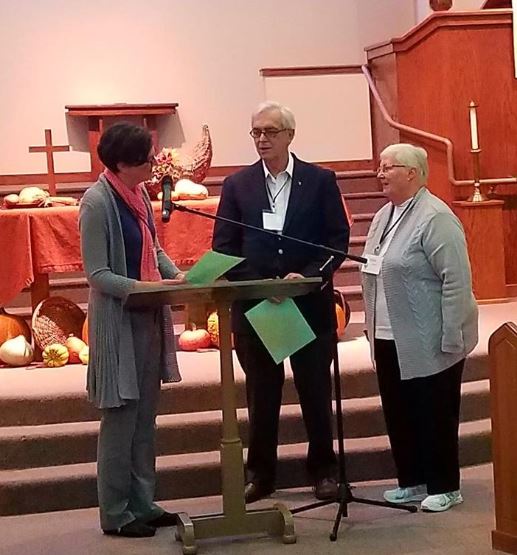 There were two deaths in my generation in my family and two deaths of women who were good friends of mine here at Franke Tobey Jones. There are big holes in my heart and in my life with these folks gone.

The outcome of the election was also a major lowlight. However, from that came a resolve for me to be kinder, and to resist all forms of persecution. I finally decided that I was tired of being “tolerant” of those people who spew hate. I am resolved to call out bigotry wherever I find it. That’s what my safety-pin says to the world. 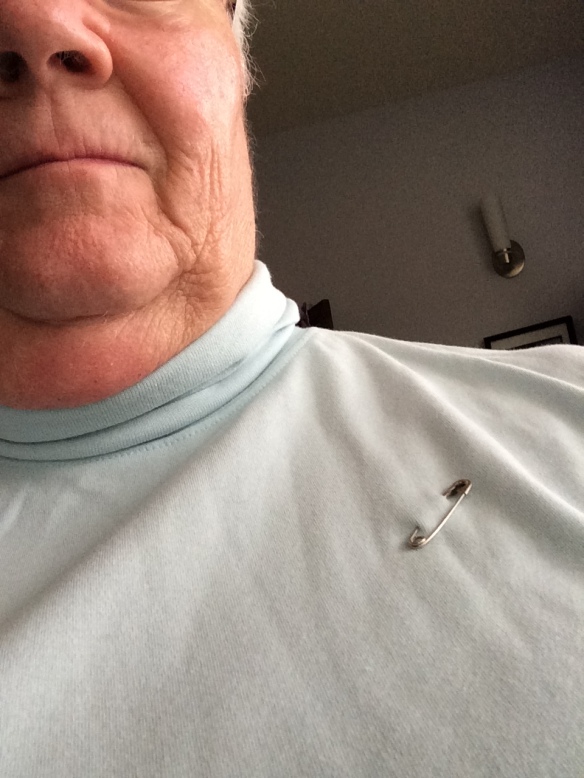 I kept off part of the weight I lost in 2014. Two trips in the spring, and three trips in the fall found 15 additional pounds on me (I have no control over what is served to me on Amtrak and I have no willpower when everybody else is having desert). It’s also almost impossible to exercise when you’re traveling. I’m still able to completely control my diabetes with exercise and diet, and I no longer have to take statins for high cholesterol. I try to exercise regularly by walking, and sessions on the NuStep (although I need to put strength workouts back into my routine). Tai Chi has fallen by the wayside.

My faith in God remains strong, and I’m in a very supportive, loving, affirming church environment. I can’t begin to say how much those people mean to me.

I attend Bible Study at the church almost every week, and it has deepened my understanding and faith.

The affirmation of being elected to the office of Vice-Moderator of Presbytery was a major boost to my ego and mental health.

I have burrowed further into the community where I live. I walk weekly with a group from the church (and then we drink coffee afterwards), so friendships are deepening there. We also have an informal group from Franke Tobey Jones who meet for Happy Hour once a week. During the warm weather we met at the Gazebo next to our house, but when it’s too cold to sit outside comfortably in the evenings, we meet in my living room.

Sadly, we lost more of our friends here this year. Two of my best friends (part of the Gazebo Group) died suddenly, but not unexpectedly. We have been able to welcome a couple of newcomers into our circle. It’s all part of the rhythm of life – folks leave and new people arrive.

My cousin, who is just a year older than I am, lost her husband suddenly this spring, and my brother-in-law died suddenly right before Thanksgiving. When death comes to my generation, it reminds me once again of the impermanence of life. 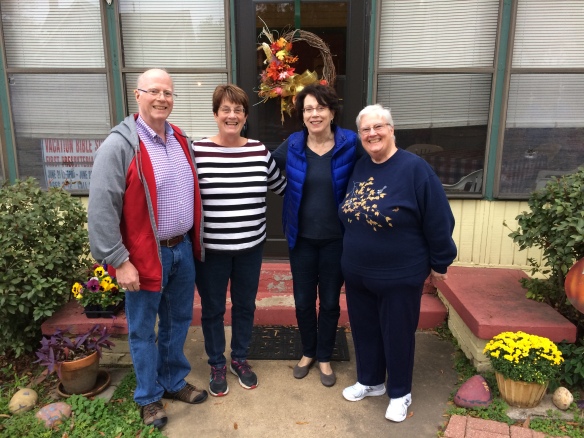 The good thing about funerals is that the family gets together. Here are all three of my siblings. We haven’t all been together since my son’s wedding in 2013.

I had a vegetable garden again this year, 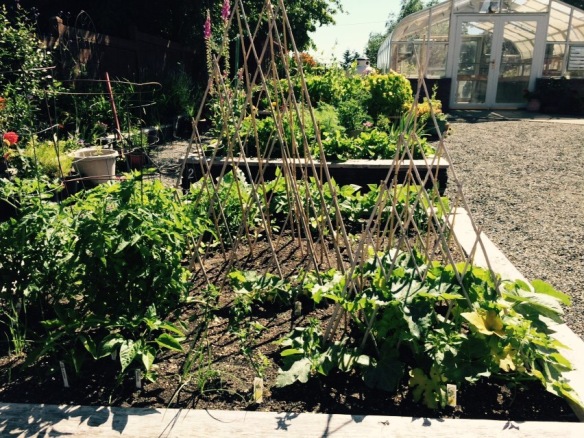 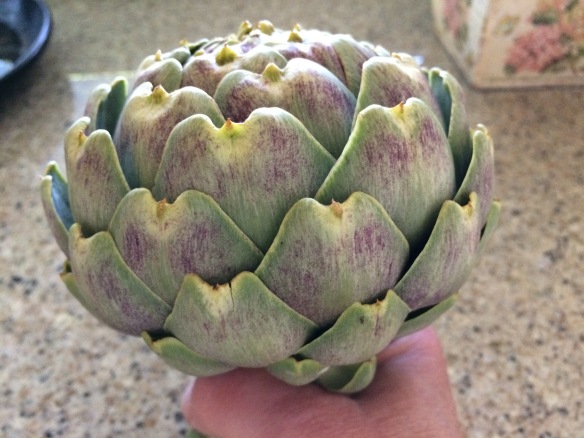 I have not been able to write anything about my reaction to the election. I was struck dumb for almost a month over the fact that hatred, misogyny, racism, jingoism, sexism, paternalism and hetero-normity won out. I have decided I will do what I can to resist this scourge of evil. I remind myself that rarely is a society changed from the top down, rather big change comes slowly and through small people doing kind things. Eventually, the selfishness will founder in the face of goodness. I’m checking my news sources and trying, in my small part, to keep to the truth, and to believe that goodness will prevail.

I’m bidding a farewell to 2016. It was a rough year in some respects. Unfortunately many of the good things were overshadowed by death, and loss. The major thing I’m taking with me into 2017 is a new confidence in myself and a new resolve to not let hatred win.

Happy New Year to all of you, gentle readers. Tomorrow I’ll bring you my “intentions”!

Chapter 46 of Waking Up White: and finding myself in the story of RACE by Debbie Irving

There aren’t any questions at the end of this chapter. But Irving leaves us with this thought:

The good news is that everyone can do something to loosen racism’s hold on America. The bad news is that unless you set yourself up for success, trying to do something helpful can actually perpetuate racism. Take time to learn and engage with the problem in order to lower the chances of making the same mistakes I did.

Reading this book, and actually working through the questions at the ends of the chapters is another step I took to “learn and engage with the problem”. I encourage you to do the same.

Chapter 45 of Waking Up White: and finding myself in the story of RACE by Debbie Irving

Chapter 44 of Waking Up White: and finding myself in the story of RACE by Debbie Irving

Challenge yourself in the next conversation you’re part of to ask more questions than you typically would and refrain from offering your own opinion. Take note of where the conversation goes.

Since serving as a Table Facilitator at Dallas Dinner Table for several years about 10 years ago, I have found the best way to be in a group is to listen deeply. It’s hard when you first start practicing this to not offer your own opinion at every turn, but you learn so much more, and the other people in the room feel so much more valued if you just shut up and LISTEN.