Today I was reminded of Mama’s funeral (thanks, Facebook) 25 years ago. I’m so thankful that I had my parents as long as I did. They were wonderful people, and I hope we did as well raising our boys as they did raising the four of us.

Today I’m thankful for a tame computer tech (my son) who is driving four hours to do some needed updates and to change out our modem, router, and install a new AppleTV device. He is super helpful over the phone, and when necessary makes house calls for the low, low price of a good Mexican dinner.

Today I was reminded of Mama’s funeral (thanks, Facebook) 23 years ago. I’m so thankful that I had my parents as long as I did. They were wonderful people, and I hope I did as well raising my boys as they did raising the four of us.

For the month of November, I’m going to try to include gratitude in all my posts (and post every day.)

Today I was reminded of Mama’s funeral (thanks, Facebook) 20 years ago. I’m so thankful that I had my parents as long as I did. They were wonderful people, and I hope I did as well raising my boys as they did raising the four of us. 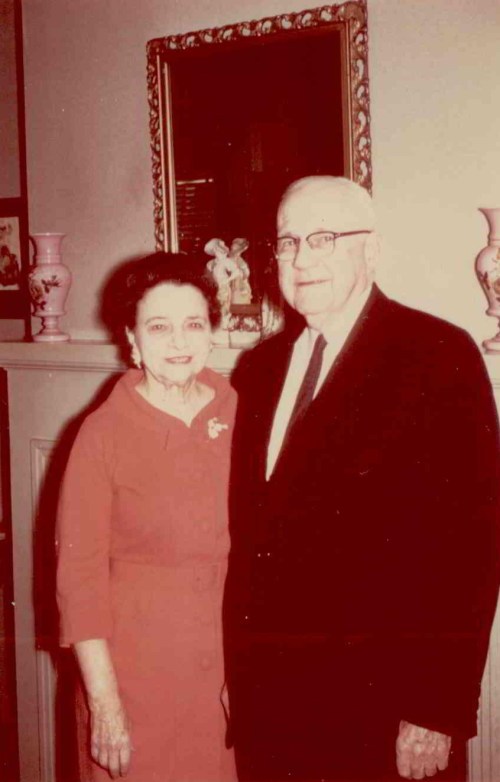 As we approach our 50th Wedding Anniversary in June, I’m remembering all the 50th Weddings that have gone before us. This is my grandparents – the first 50th Wedding celebration I remember. Also BOTH my parents AND Big Al’s parents had 50th Wedding celebrations. I wonder if the daughter-in-laws knew what they were getting into when they said “I do.” With the history in this family, they better understand they don’t get out of it easily.

How did your family earn money? – Papa was an engineer with Shell Chemical Co. Mama was a stay-at-home housewife until after I left home. When Harriet and Betty were both in college at the same time, Mama got a part-time job with Visiting Homemakers as a supervisor. When Shell wanted Papa to move from Westfield (the Union, NJ Lab) to south Jersey, he retired with 30+ years, although he was only 56 years old.

He then went to work for a drug manufacturing company near Westfield, but he hated it. It was a completely new corporate culture and he never really fit in.

In 1970, Mama and Uncle Bill decided that Nannie and Gankie were not able to live by themselves in Texarkana. Nannie was getting forgetful and Gankie was having trouble driving, so Uncle Bill tried to get them to move to Richmond, VA, where he lived so he could take care of them. I was living in Westfield with Mama and Papa at the time, and I could see that Papa was really getting stressed out with the new job, so I suggested that they sell the house in New Jersey, and buy Nannie and Gankie’s house in Texarkana. Papa was already retired from Shell, and felt like they could live on his retirement until he got something else to do. The cost of living in Texarkana was significantly lower than in New Jersey. So in the summer of 1970, they sold 428 St. Marks Ave, and moved to 1924 Laurel in Texarkana.

Gankie was so thankful not to have to leave Texarkana that he sold them the house for what he had paid for it 5 years before. Nannie and Gankie moved into an apartment in Texarkana and Mama and Papa paid off the house with the money they got from the house in Westfield. Papa then took a couple of contract assignments as an insurance adjuster after hurricanes. Then he got a job with the Water Company in Texarkana. That saw them through until he turned 65 and Bill Greisser graduated from M.I.T.

How did your family compare to others in the neighborhood – richer, poorer, the same? – We always seemed to have about the same amount of money as anyone else in the neighborhood. We never had more than one car until after I was in college. When we moved to New Jersey, money was really tight because Mama and Papa had to buy a house and they had never owned one before, so they had to take out a personal loan for the down payment. I remember they got me to sign over some savings bonds that had been bought for my college as gifts when I was born. They used them for part of the down payment. The first five years we lived there were very tight while Papa paid off the personal loan. I learned a lot about doing without and not expecting “stuff” in those years. That was when I was in Junior High and High School, so I really felt it. I remember Mama had to wait until payday until to buy us school shoes every year, and I worked as a baby sitter and later at the public library for any pocket money I had. But I never had to contribute money to the family in order to buy groceries, or anything like that.

Between my junior and senior year in High School I went on a two-month trip to Europe with my Girl Scout troop. We had a rule that we had to earn at least half of the money ourselves – parents were not allowed to contribute the whole cost of the trip, so that helped me not feel like I had less than the other girls.

The total cost of the trip was a couple of thousand dollars – for everything – but in those days it was a lot of money. I worked and saved and asked for money as birthday and Christmas presents, and I saved it all myself. We spent one summer in Texarkana and I was my grandmother’s upstairs maid. 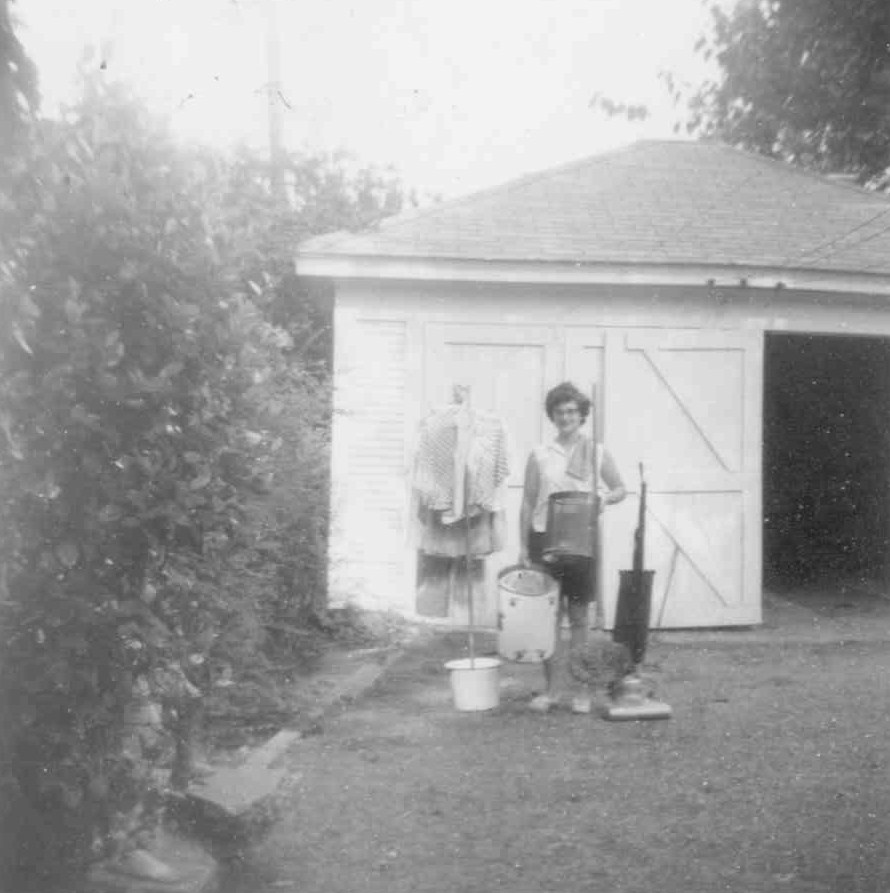 She had a cook year-round, but she usually hired another girl (usually a high school or college student) while we were there in the summers. That year it was me. She taught me about moving the furniture to dust/vaccuum under it, wiping out the window sills once a week, cleaning the bathrooms, making the beds, and dusting and polishing the furniture. I also earned money by doing the ironing for the Westfield Women’s Club. I could iron a mean tablecloth!

What kinds of things did your family spend money on? – We mostly spent money on the necessities of life. We always had decent clothes, but they were usually bought on sale. We had plenty to eat. We lived in decent houses. The furniture and appliances were seldom new – often “contemporary attic” or “relative’s basement”, but I wasn’t embarrassed to have friends over. I earned the money it took for special treats – for instance, I was almost 11 when my brother was born, and I earned to money to go to church camp that summer by doing his diapers. I washed them and hung them up to dry and folded them, three times a week.

We spent any extra money on travel, and vacations to see family.

Through the giant sequoias in California.

At the Grand Canyon. 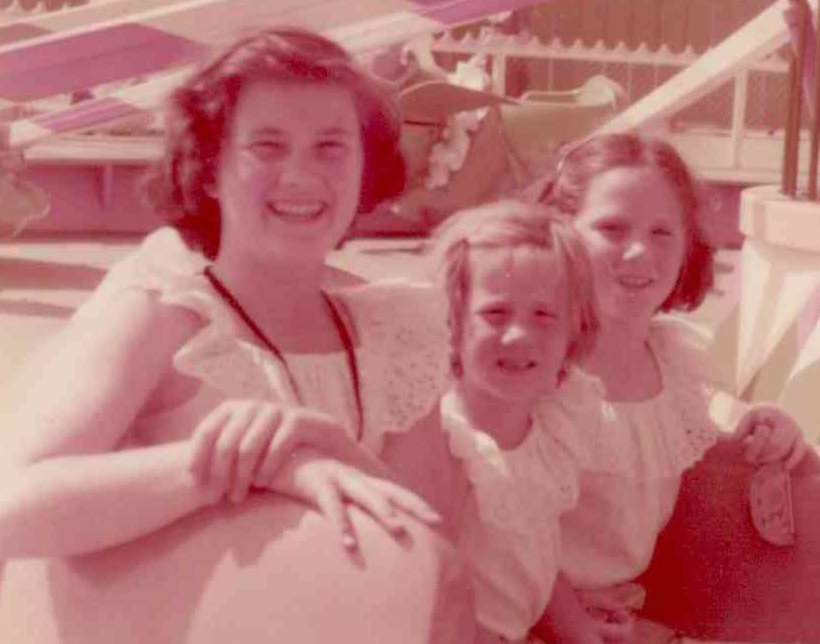 We rarely went to the movies, but we went to all the free concerts at church or in the town square. We would rather buy books than jewelry.

It wasn’t luxurious, but it was comfortable to live in my family growing up.

Who was more strict:  your mother or your father? – They were both pretty equal in discipline.

Do you have a vivid memory of something you did that you were disciplined for? – I’ve already told about things I did wrong before the age of 5. Basically I was totally a typical first child. I had the “good girl” business all wrapped up. I was probably really obnoxious about not getting into trouble.

This picture is from Mama and Papa’s Engagement party. That’s Margaret and David Newbold on the left, Nannie and Gankie in the middle, and Mama and Papa on the right.

In June of 1993 we had a big party for their 50th wedding anniversary in the fellowship hall of the same church they were married in – 1st Presbyterian Church of Texarkana, Arkansas.

Here they are before the party started. You can see Mama was in the middle stages of Alzheimer’s then.

Here they are with the four of us – I’m on the left, then Harriet, then Mama, then Betty, then Papa, and then Bill.

Mama and Papa with my family.

Mama and Papa with Harriet and her husband. 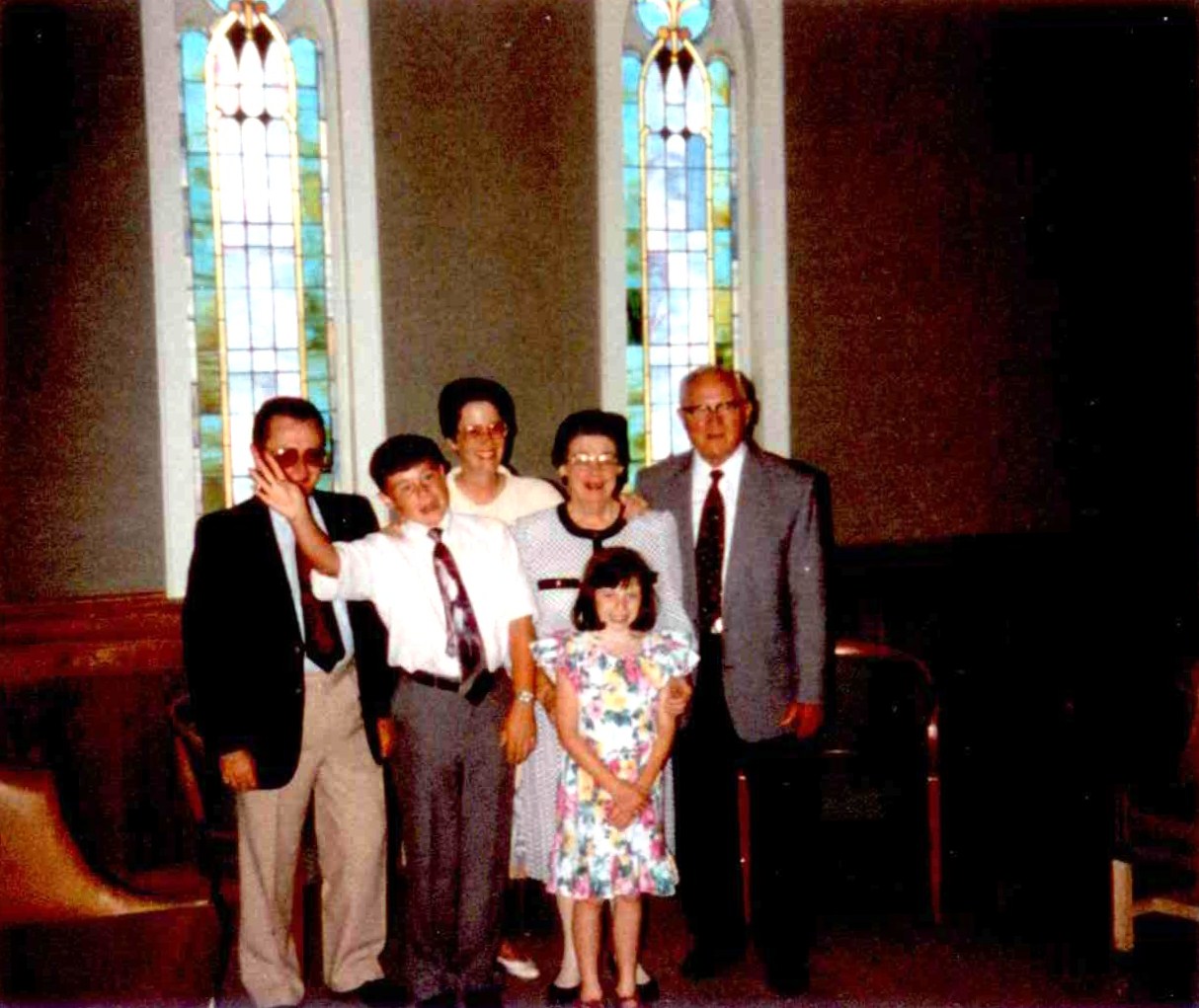 Mama and Papa with Betty’s family. 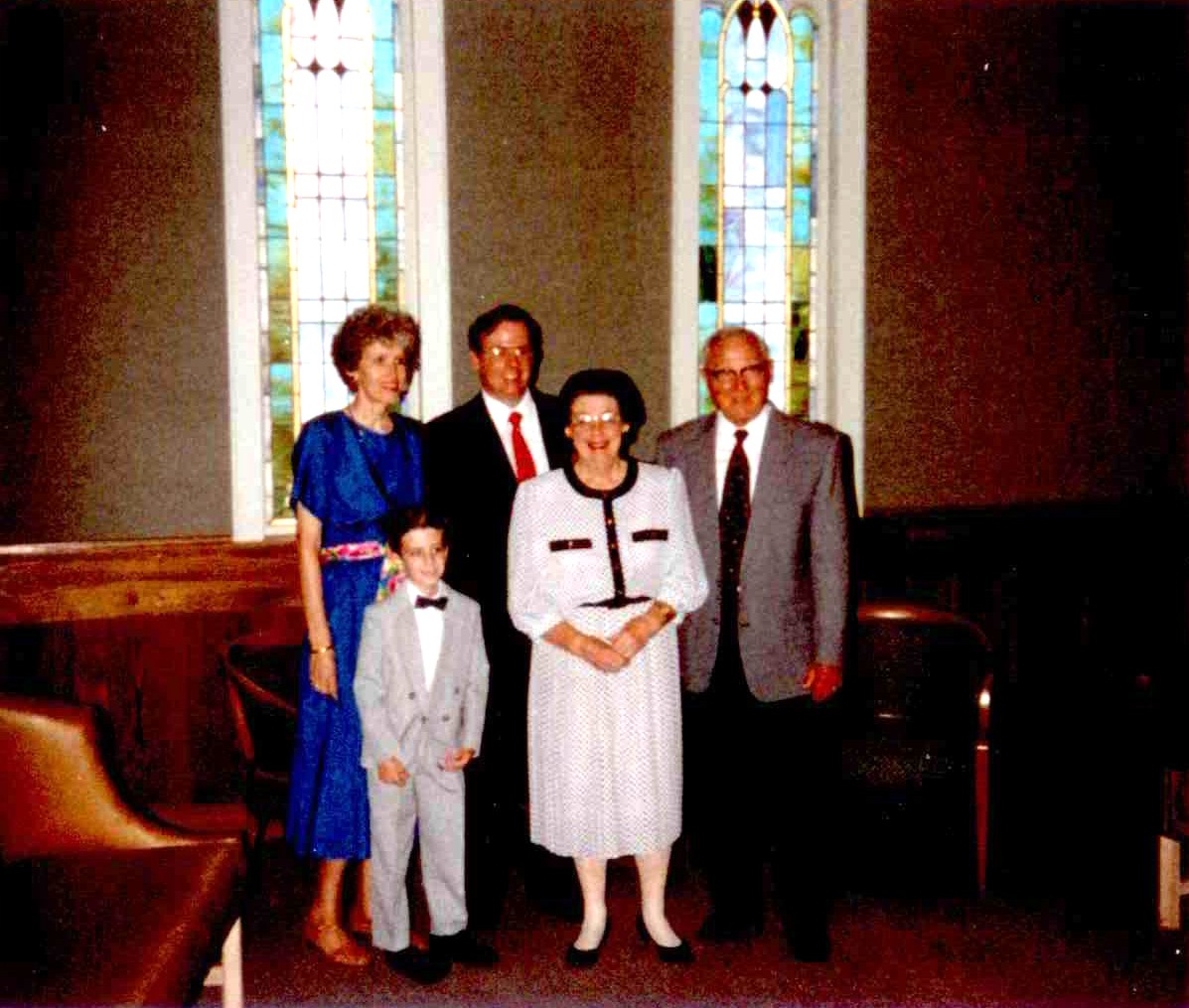 Mama and Papa with Bill’s family.

Many of the people who were in the wedding were also at the 50th Anniversary party.

I was sitting in church with Papa several years after Mama’s death, and I looked over at his bulletin. He had underlined the date – June 24, 2003 – and had written “60 years ago” under it.

Tell me about your parents. Where were they born? – Papa was born in Spokane, Washington, and Mama was born in Texarkana, Arkansas.

What memories to you have of them? – I’ve already done a couple of long posts about each of them. Here’s the one about Papa (it also happened to be the eulogy I gave at his memorial service.) Mama figured prominently in this one and also on Mother’s Day in this one.

As you can probably tell from my posts in this series so far, both of my parents figured prominently in my life. I can’t write about me and my childhood without writing about them. 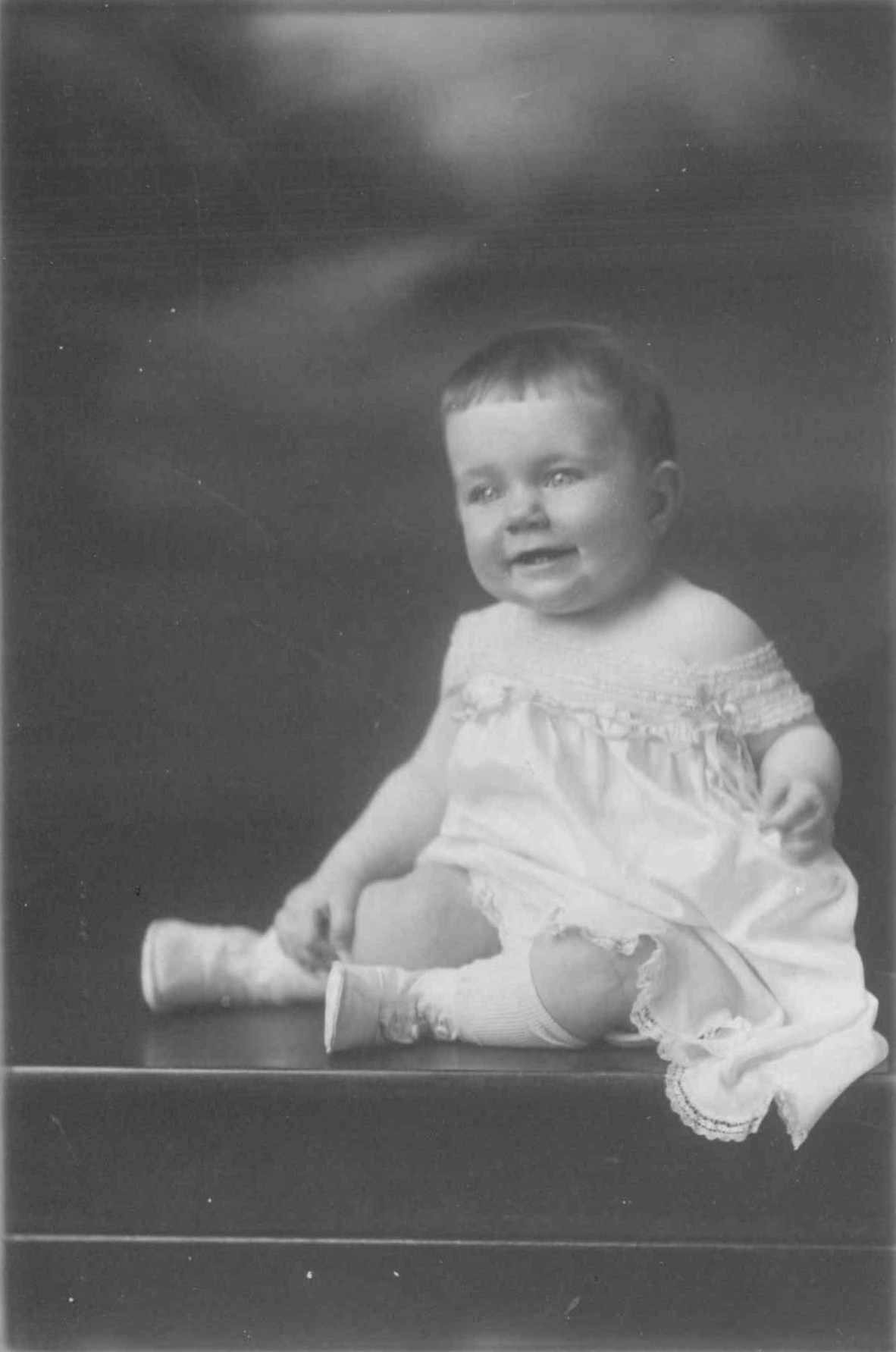 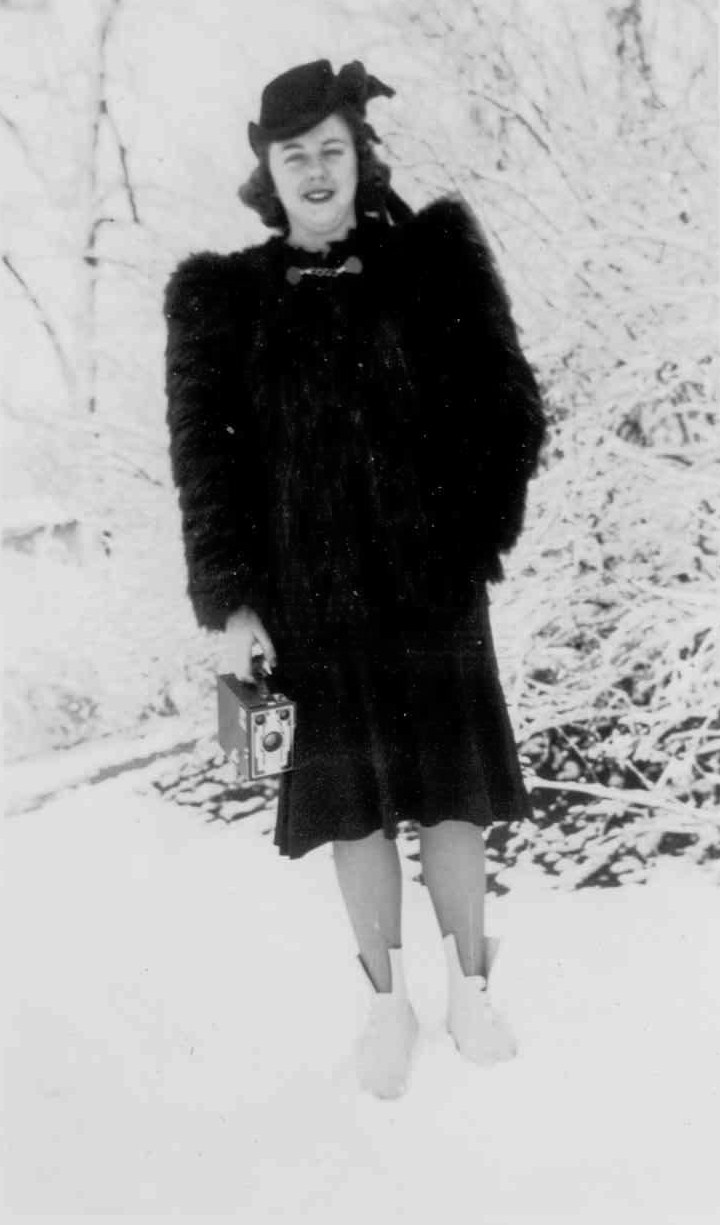 Mama at the University of Arkansas.

I imagine you’ll find out lots more stuff about both of them as this series goes. on.