If you remember, I began this diet journey on January 14, with an “indoctrination” appointment with the dietician and the doctor. You can read about that here. At this point my daily menus consisted of two servings of protein (150 cal each), one serving of beans (110 cal each), one serving of nuts (100 cal each), at least 5 vegetables (more if desired), one serving vegetable starch (45 cal each – that’s 1/2 a potato), two fruit servings a day (80 cal each), 1 grain (1/2 cup of cereal or 1 piece of whole wheat bread – 75-100 cal), four tsp oil (40 cal each), 2 servings “Medical Food” (Atkins bars were cheaper than the stuff they sold at the hospital), 1 cup coffee or tea, unsweetened – except with Stevia, then only one packet a day, and all the spices, herbs, lemon or lime, mustard, horseradish, etc. I wanted. I also was required to eat about 1300 calories a day, and eat something every 2-3 hours. Breakfast at 8:00, snack at 10:30, lunch at 1:00, snack at 4:00, supper at 7:00, snack at 10:00 (all times approximate). It worked pretty well when I could carry an Atkins bar to church in the morning, or to an afternoon meeting.

Through this whole thing both the doctor and the dietician have been advocating exercise, in addition to the diet, so I faithfully put in 3-4 sessions of 50 minutes a session on the recumbent cross trainer, and 2 sessions of Tai Chi for 50 minutes, every single week.

One week later I met again with the dietician and doctor, and told y’all about it here. (I had lost 2.5 lbs.) On January 28, after being almost pathological about sticking strictly to the diet, I had lost 1 more pound. I was just about ready to throw the baby out with the bath water at that point. I talked about some of my woes trying to feed me in a diet-friendly way, and still feed Big Al what he wants here. That was February 1st, and then I basically went quiet.

What happened was the doctor and dietician took away all my grains, and all my beans, and all my potatoes! I was pretty rebellious at that point, but the doctor said, “Try this for one week, just as a proof of concept,” so I did. And when I went in for my appointment on February 4, I had lost 8 pounds!

The dietician suggested that I keep up the exercise, because it was obviously helping, and add some strength/resistance work, which I did.

I was pumped! I stuck to the diet religiously the next week, kept exercising regularly including strength training, and when I went for my appointment on February 11, I had only lost one more pound. Gloom, despair, and agony! Not pleased with my lack of progress, the doctor and dietician took away all my fruit except berries and cut them back to one serving a day, and told me to eliminate my Atkins Bars. (I was really POed at that, because those things aren’t cheap, and I had just bought enough from Amazon to stock a small grocery store, because by buying that much I could save significantly (25-40 cents a bar.)) Part of my rebellion at this point was the real difficulty in finding something easily portable to take to church for the morning snack, or to bridge, when I went from there to a meeting, for an afternoon snack.

My dietician was away at a conference or something last week, and I soldiered on without having any feedback from the doctor or dietician.

That brings me to the second part of the story. Back in the fall of 2013 my potassium levels were elevated, and my GP became concerned enough to refer me to a Nephrologist. The earliest appointment I could get was for January 21. I met with him and he ordered a whole plethora of blood tests, and an ultra sound of my kidneys. I was scheduled for an follow-up appointment on February 18. He talked to me and said all the problems that were there in the fall were gone, and I was fine, except my sodium levels were too low. I was drinking too much water! I should cut my water back to 6 glasses a day, and, oh, by the way, here’s a diet you should follow. And he proceeded to give me a diet that said to limit meat, and oils, and eats lots of grains, and, just for good measure, don’t eat any asparagus, spinach, mushrooms, or red meat!

At that point, I saluted smartly, said, “Yes, Sir,” thanked him, and left. His diet and instructions were the total antithesis of the diet I was on – and doing reasonably well with. I decided not to make any changes until I had talked to my diet doctor.

So, yesterday, I was back with my doctor and my dietician, and, lo and behold, I had lost another 7.5 pounds bringing my total to 20 pounds in 6 weeks.  I told them what the nephrologist had said. I also told them to fight it out with him, and let me know the outcome, but until they told me differently, I would stick with what they were selling. So my diet doctor is now monitoring my blood tests to make sure I keep my numbers where they should be, and we decided I don’t need to be so pathological about avoiding salt. I’m also allowed to have an Atkins bar if I want it on days I work out! And maybe I can have poached eggs on toast occasionally, if I’m really careful of my carbs the rest of the day.

I’ve found really good chicken sausage at Trader Joe’s in several flavors – I particularly like the spicy Italian, and the spicy jalapeno. I can have either one or two eggs for breakfast every morning with a sausage link. For afternoon snacks, I can have a whole Hass avocado with some salsa when I’m home. I’ve rediscovered broccoli, yellow squash, three colors of bell peppers, mustard greens and turnip greens, and mushrooms, none of which Big Al will eat. These are all things I’ve always liked, but never bothered to fix because I didn’t want to do two meals. Today I fixed cucumbers and onions in vinegar and was transported to my childhood summer at my grandmother’s house.

So that’s the saga so far. I’m taking this diet as it comes, and trying not to be impatient. My (secret) goal is to lose 130 pounds by my birthday in August, but if it doesn’t happen, that’s okay, too. Right now I weigh less than I’ve weighed since 2009, so that’s progress.

I know I’ve been really lax about keeping y’all up to date on my diet progress, and I promise I’ll do a long post tomorrow (first day in a couple of weeks that I’m not out of the house for at least 7 hours – and I think I’m retired?).

Anyway, I went to the clinic this morning and I have lost 20 pounds in 6 weeks!

Sorry, I just had to brag!

As you may remember, my one word for the year is “Provide”.

As you also may remember, I finally decided to do something about my weight. To that end, I am enrolled in a medically supervised weight loss program, that I’ve written about here, here and here.

The major way I’m providing during this period is by trying to be sure Big Al is eating. He is unimpressed with the vegetables that are the basis of this diet. He is also dedicated to things like 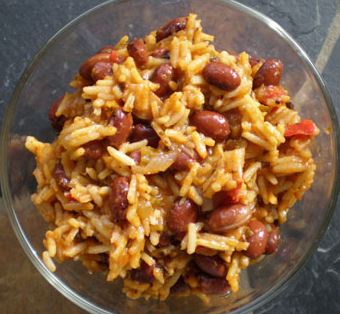 red beans and rice with sausages, 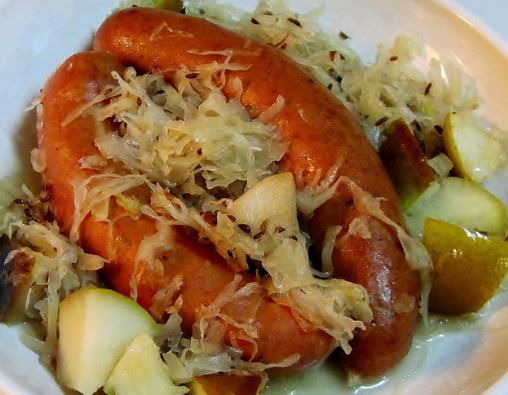 and bratwurst with sauerkraut and little red potatoes.

I probably don’t need to tell you that the doctor and the dietician visibly paled when I suggested either of these meals. To them, sausages are, by definition, highly processed, loaded with salt (and don’t even mention the salt content of sauerkraut) and generally POISON!

Consequently, I’ve been fixing meals that I have to eat and he’s beginning to look a little sad at meal times. So I PROVIDE him with occasional comfort food. For the most part, he’s been a pretty good sport about it, but he almost rebelled today when I presented him with broiled fish, asparagus, and broccoli. He refused the broccoli, and I gave him a can of corn, so he’s a little happier.

It’s best I can do for him right now, and he has admitted he’s lost a couple of pounds, even while consuming an entire bag of barbecued potato chips in one sitting.

It’s a pain to cook two meals, but I do it occasionally, because I’ve promised to try to PROVIDE this year.